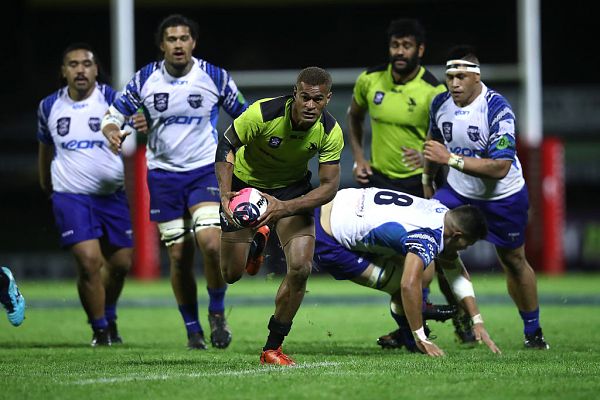 With gates opening at 3:30pm, the curtain-raiser match between Thirteenth grade Pukekohe Gold and Tuakau was met with a clearing in the weather which encouraged families and friends to head into the stadium for an action-packed evening. After the curtain-raiser, two performances from Wesley College brought a youthful and exciting energy into the air while Fijian Latui and Kagifa Samoa warmed up the field.

Kicking off at 5:40pm, an enthralling match between Fijian Latui and Kagifa Samoa saw Fiji just managing to hold out a determined Samoa by six points, for a final match score of 37 – 31.

The game form of Rapid Rugby itself aims to incorporate innovative new laws and competition rules which are designed to increase ball-in-play time and reward attacking, free scoring play. With rules inclusive of a nine point try (any try-scoring play that begins inside a team’s defensive 22 will see 9 points added without the need for a conversion), and no luxury of kicking the ball out on the full within their defensive 22 to relieve pressure, the game form is exciting and innovative, with keeping the ball in the field of play on top of the players agendas.

The game itself saw Kagifa Samoa trailing by as much as 19 in the closing stages of the first half. Though the team had the ball parked in their offensive half for the better part of the opening five minutes, the ever-present danger of Fijian Latui saw them register the first score of the game.

Later in the game, Kagifa Samoa made the first breakthrough of the second half despite being a man short. Flyhalf Luke Makris cleverly directed play out wide before receiving the ball back on a nicely timed run. Makris was all smiles as he scored a try in his first Rapid Rugby match and finished off his good work with a successful conversion.

Kagifa Samoa kept Fijian Latui under the pump, and Fiji had to dig deep and play smart, fortunately two things they’re pretty good at doing. The match ensured that the crowd hardly had time to find their seats between tries, in one dominant 10-minute burst Fijian Latui scored three times over.

On top of an exhilarating match, Global Rapid Rugby really put on a show, with live music pre and post match, two pyrotechnics displays, spot prizes, fire dancers and wrapping the game up with a performance by local hip hop group Rewa All Stars. The night was a captivating look into the experience side of rugby, and we look forward to hosting future matches.