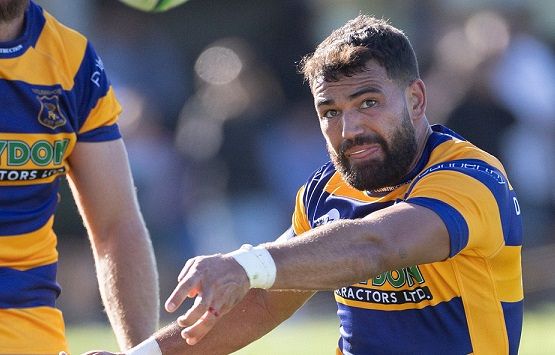 Riley Hohepa landed a long-range penalty with time expired to give Patumahoe a 10-7 win over Manurewa in an epic McNamara Cup clash at Mountfort Park on Saturday.

A draw would have befitted the game with both sides producing a superb all-round display where neither side was able to break free of the other.

Patumahoe scored the opening try of the game five minutes before halftime when winger Lesa Sapau ran a brilliant line to hit a gap and dot down.

But Manurewa answered back immediately through impressive hooker Ioane Moananu to level things up on the stroke of halftime.

The dead lock could not be broken during the second spell, with the impact of every 50-50 call magnified. It was Patumahoe that got the luck of the green as the clock hit 80 minutes and Hohepa did the rest to send his side to the top of the standings.

“It is probably how the game should have ended either way – it was such a battle for 83 or 84 minutes,” Patumahoe coach Brad Healy said. “It was just going to be that little moment and who could take it and thankfully it was us.

“The physicality – I am glad I am standing on the side lines. The game was played in good spirits – no real niggle or anything. Both teams just pushed each other for 80-plus minutes.”

Karaka kept pace with the leading sides as they eased to a 41-13 win over Papakura at Karaka Sports Complex.

The two sides played out a thrilling opening round game in which the defending champions only just managed to sneak home, but Saturday’s result was far more clinical.

“We were accurate with our attacking, scoring some good tries.

“From there the game became a bit messy with errors from both sides.

“There was improvement from the last time we played them, which was good to see.”

Bombay picked up their second win of the season and did so in convincing fashion with a 66-10 win over Ardmore Marist at Bruce Pulman Park.

Sam Aiono’s side jumped out of the blocks and never looked in trouble as they recorded a bonus point win to move up to fifth in the competition standings.

“We were happy with our performance,” Aiono said. “We’re starting to see improvements from our side. We still ain’t where we want to be but we’re heading in the right direction.

“We displayed a lot of good things out there but we also made a lot of mistakes that we’ll need to fix up with we want to make that top four.”

Pukekohe maintained fourth place with an 80-0 demolition of Weymouth at Laurie Gibbons Field.

It was a nice way to bounce back after a heavy defeat at home to Manurewa last weekend.

“Yea happy to get the win after a disappointing game last week,” coach Michael Porter said.

“Also happy to rest some guys and give some young boys a run.”

Bombay’s Bob Chandler Cup side had to work extremely hard to earn a 22-21 win over Puni’s Sid Marshall Shield side on Saturday.

Pukekohe’s Bob Chandler team completed a comfortable 53-10 win over Maramarua in the only other game to feature a Bob Chandler side.

Drury moved into third on the combined table and first overall in the Sid Marshall Shield standings with a 22-14 win over Waiuku while Te Kauwhata are a point behind after they edged Manurewa 19-17 at Mountfort Park.

Karaka scored a 29-27 win over Patumahoe in the Massey Cup U21 contest that served as the Counties Energy Game of the Week.

The two sides went back and forth in an epic contest with the home side coming out on top.

Manurewa thumped Papakura 34-0 in the other game in the grade.