Huge coup for Counties Manukau as All Black signs on 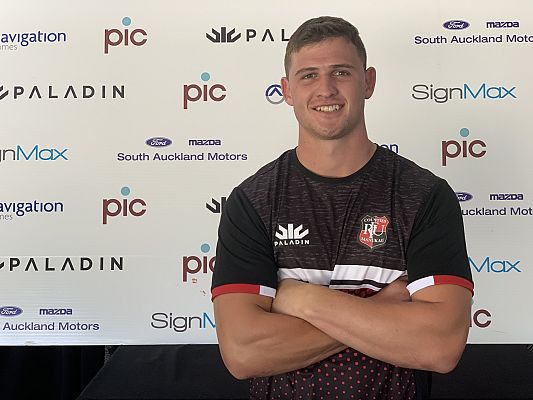 The Counties Manukau Rugby Football Union has today unveiled the signing of All Blacks loose forward Dalton Papalii in a move that bodes well for this year’s Mitre 10 Cup campaign.

The 22-year-old will add much-needed experience to the Steelers squad having played for Auckland since making his provincial debut in 2017.

A year later, he made his Super Rugby debut for the Blues before going on to play three tests for the All Blacks on their end-of-year tour after being called up as injury cover for Sam Cane.

Papalii is currently in pre-season training with the Blues ahead of their upcoming Super Rugby campaign but will join Counties Manukau from July of this year.

The signing of a player who is expected to add to his test caps in the coming years is a huge coup for new Steelers coach Tai Lavea, who coached Papalii as a schoolboy at St. Kentigern College.

“This is a huge signing for the Steelers. Dalton is going to bring so much to the squad,” Lavea said.

“He’s a natural leader and will come into our setup with plenty of experience to contribute.

“It’s no secret last year was a tough one for Steelers fans but we hope this signing will show them our intent ahead of the 2020 season.”

For Papalii, the decision to link up with his old coach in Lavea was a no-brainer.

“I’m really excited about joining a provincial union with such a proud history and such wonderful, loyal fans,” he said.

“I’ve got heaps of friends and family out this way and my dad played club rugby in the region so I feel very connected to the place.

“Tai and I also go way back and I know he’s going to do great things with the Steelers.

“This is a momentous day for our provincial union, for our fans and our community,” Lawton said.

“Rest assured we still have plenty of spots available in our roster for local talent who will get the chance to show their wares when the club rugby competition kicks off in March.

“I’d also like to acknowledge the work that our interim general manager Dale Tucker put in to get this deal with Dalton over the line. He deserves a lot of credit for this crucial signing.”

Papalii also confirmed he would be aligned with Patumahoe following in the footsteps of his father Mark who played two seasons there.