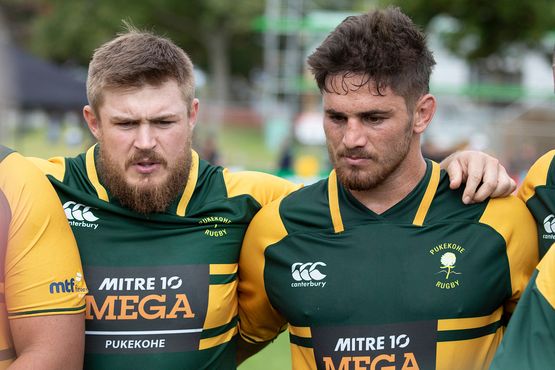 Pukekohe Mitre 10 Mega scored a maximum four-try bonus point win over Papakura Ray White Saturday to move into fourth spot on the McNamara Cup standings and are a win away from a return to the semi-finals.

The visitors jumped out of the blocks quickly to basically have the game sewn up at halftime and went on to pile on 10 tries in the 62-26 victory at Massey Park.

It sparks a huge turn-around for Pukekohe. A couple of weeks back they looked out of the playoff running but now control their own destiny.

“Our biggest thing is guys are playing with more freedom and not worrying about making mistakes,” coach Sean Polwart said. “After a few losses and guys playing out of position we went into our shell a little bit and it affected the way we were playing.

“We went through a rough patch with injuries but we have hung in there and the guys have kept their heads down and had a few wins.

“We have a task ahead this week to try and allow ourselves a chance.”

Bombay kept their hopes of securing a home semi-final alive while they put a massive dent in Patumahoe’s chances of playing semi-final football with a 43-27 win at Bombay Domain.

The visitors took a narrow halftime lead but Bombay put together a quality second half to earn the win.

Bombay has the final round robin weekend bye and will be hoping Manurewa Kidd Contracting don’t score any competition points when they play top-of-the-table Ardmore Marist South Auckland Motors next week so they get the chance to host a semi-final.

“It is much better than where we were this time last year,” Marr added in reference to Bombay watching other teams knock them out of a semi-final spot in the final round 12 months ago.

Manurewa did their part to stay in the fight for that home semi by beating Karaka 41-32 at Mountfort Park.

Karaka needed to win to have a realistic shot at playing in the semi-finals and were clearly motivated but Jeremy Clark’s side did what they needed to.

“It was a good performance and we are ticking off all the right boxes,” a delighted Clark said. “I knew Karaka would throw pretty much everything at us and they did. It was a good game and we came out on the right side of it.

“Last week was a bit of a character-building one at Patty and I thought the performance was another notch up against Karaka so I was happy.”

Karaka remains a mathematical chance of making the semi-finals but they would need Pukekohe to lose to Waiuku as well as Patuamhoe falling to Papakura.

Waiuku continued their superb second half of the season as they grabbed a comfortable 34-12 win over Onewhero Silver Fern Marquees.

Lawrence Lawrence’s side has won six of their last nine games and would be in the frame for the semifinals had they enjoyed a slightly better start to the season.

“I am pleased – we had a pretty slow start but it is always tough on the Hill,” Lawrence said. “It always seems to be a place where we get off to a slow start but with what we have built this round in particular the guys were able to settle into their work.

“It was good to come away with a pretty convincing win.”

Bombay earned a 34-21 win over Waiuku in Massey Cup U21 in the only match played in the grade this weekend.

Onewhero edged Bombay 24-12 in Under 85kg action. Pukekohe and Patumahoe Brady Construction Pak N Save drew 13-all while the Papakura Stallions thumped Waiuku 45-0.

Papakura claimed a 31-22 win over Patumahoe Searle Group in the Women’s competition while Manurewa smashed College Rifles 43-5. Ardmore Marist went down to Marist in their clash.