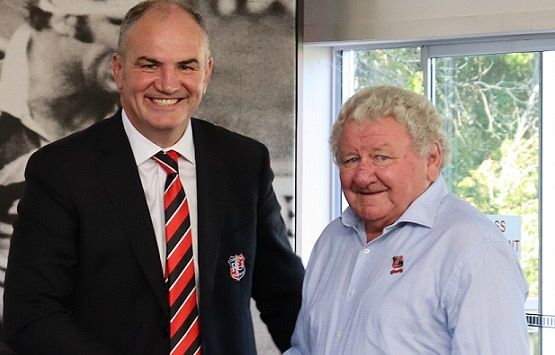 Long-time referee and administrator Gary Martin was made a life member of Counties Manukau Rugby at the Union’s recent Annual General Meeting.

For nearly 30 years Martin has served in various roles within Counties Manukau Rugby and especially within referee circles, where he has made a profound impact on the sport.

In 1993 Martin transferred from the Taranaki Rugby Union to Counties Manukau and so started a relationship with the region that would change the course of history.

Martin was secretary of the Counties Manukau Rugby Referees Association for 25 years. In addition to that he spent four years as president and nine years in charge of appointments.

He spent time as the Referees delegate and was also a delegate for the Drury Rugby Club for a time. He was chairman for four years and was on the board of directors as well.

Martin was in charge of the scoreboard and was the ground announcer at Navigation Homes Stadium for a period.

Alongside Dave Peden, he organised the 50th jubilee in 2005 and won the George Bell Trophy as well as Administrator of the Year, Service to Sport and Service to Referee awards.

CMRFU Referee and Community Rugby Projects Manager Brandon Roberts said he couldn’t think of a more worthy recipient and a more fitting person to become the first referee to be made a life member of the Union.

“Gary is an absolute legend when it comes to volunteering,” Roberts said. “He knows everyone in the Counties and Taranaki Rugby circles.

“His love for Rugby shines through his stories and extensive volunteer resume. The relationships and connections that he created for the Referee Club and CMRFU has been priceless.

“Gary is an exemplary volunteer and man of rugby.”