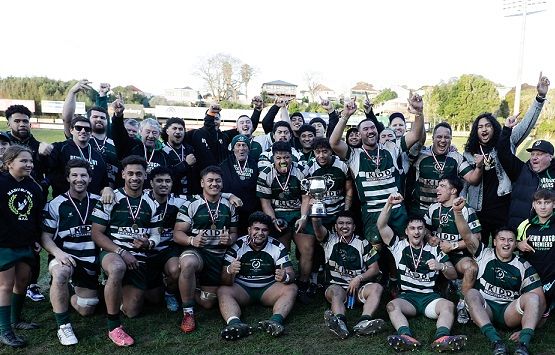 A long 24 years after the great Manurewa dynasty of the 1990s ended Jeremy Clark and his 2022 side returned the green and whites to the top of the totem pole with a memorable McNamara Cup final win Saturday.

They prevailed over the previously unbeaten Patumahoe side 22-16 in a final at Navigation Homes Stadium that will talked about for a long time.

In front of a massive and raucous crowd that was a throwback to the 1990s and club rugby’s zenith, Clark’s team did what no team has done all season and broke down the stingy Patumahoe defense while they bullied their way to a stunning victory.

Despite the brilliant performance from Manurewa, Patumahoe had their chances, including a late line-out near the Manurewa try line. But it wasn’t to be as the desperation and desire of Manurewa came to the fore.

Clark was struggling for words in a post-game interview as the emotion of the day caught up with him.

“It means so much – 24 years and we have finally brought it home,” he said.

“To everyone that has worn the jersey before, we are only a caretaker for the next person coming after us – this means so much.

“All I know is there are going to be cups of tea for days.”

For the second week running Manurewa had to defend for their lives with the game on the line as they protected their own try line in the final throes of the game.

“They were out on their feet – in the last five minutes all you can ask for is ticker and heart and we had all of that,” Clark said.

“The rugby gods have shone on Rewa this year.

“Credit to Patty – they’ve fallen at the last hurdle. They were massive in that game.”

The disappointment for Patumahoe followed heartbreak in the U21 Massey Cup final, which Karaka won 25-18.

The top qualifiers thoroughly deserved their victory – racing out to a significant lead and controlling the game for the most part.

Patumahoe roared to life late in the contest and threatened to steal a result but Gary Franklyn’s side held on for a terrific win.

Karaka claimed a big win over Patumahoe in the Bob Chandler Cup too – to move to the top of the standings. They rounded out a 31-13 win to claim bragging rights as they competition heads towards the semi-finals.

Bombay’s Bob Chandler side got back into winning form with a 36-5 victory over Manurewa while Pukekohe’s Bob Chandler team proved too strong for Te Kauwhata 39-13.

College Rifles eliminated Patumahoe’s women’s side from the 10-a-side playoffs with a 17-0 win.