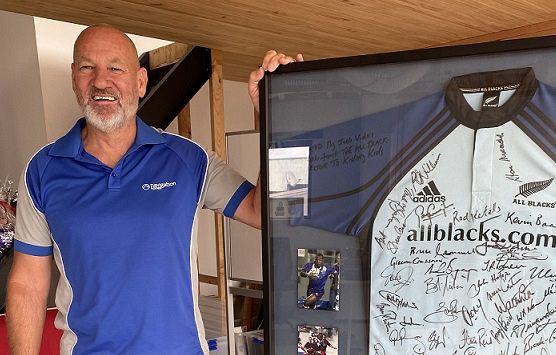 Long time supporter of Counties Manukau Rugby and the founder of Navigation Homes Aaron Hall has won the auction for the special jersey raising money to bring Joeli Vidiri back to New Zealand.

The legendary former All Blacks, Blues and Counties Manukau winger passed away last month in the United States and his local friends have worked with family to bring his body back to New Zealand for a funeral.

As part of that drive, a one-off jersey signed by Vidiri and numerous other stars of New Zealand and Counties Manukau Rugby was donated by Auckland businessman Mark Darrow and auctioned on Trade Me.

Hall, who has been a loyal supporter of the Union and of the local community through his Navigation Homes business, was the successful bidder.

“We have been heavily involved in Counties Manukau Rugby having been long-time sponsors of the Karaka Rugby Club, where my three sons all played,” Hall explained.

“I have lived out here since 1989 and, as our business has grown, we have tried to do more.

“We secured the long-term rights to the stadium [Navigation Homes Stadium] and continue to support the Union.

“Joeli was one of our most favourite sons so we thought it would be good to get involved in the auction and try to get the price up. I then decided it would be great to keep that jersey here in Counties Manukau and it will take pride of place on my wall.”

Counties Manukau Rugby chief executive Aaron Lawton was delighted the famous jersey is going to such a big supporter of the Union.

“It’s fantastic to know the jersey is going to stay within the Counties Manukau region and once more highlights the incredible generosity of Aaron and the Hall family, who are wonderful supporters of the game in this region,” Lawton said.

“I also want to take this opportunity to thank another well-known businessman in Mark Darrow for his generosity in putting this priceless treasure up for auction to raise funds to bring Joeli home.”