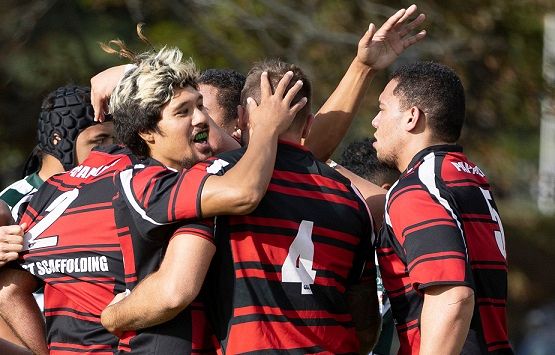 Papakura secured their first win of the McNamara Cup season as they claimed a 29-17 win over Ardmore Marist at Massey Park on Saturday.

After shooting out to an early lead, Ardmore Marist fought back to get within striking distance through the middle stages of the game.

But Kerry Petrie’s side kicked clear in the final quarter to give their semi-final hopes a major boost.

“That was an important five points for us,” Petrie said. “Ardmore were certainly a much improved side than the team we played pre-season.

“Our discipline around how we play still needs improvement. It showed late in the game when that aspect became more accurate, our systems work for us.

“Bradford Lemalufaitoaga is beginning to direct the team well with Laga Fasavalu and Atta Leveanasiga having much improved performances up front.”

Manurewa maintained their unbeaten start to the season when they accounted for Pukekohe 45-18 at Colin Lawrie Fields.

In what has been a similar theme this season – there was little between the two sides through the first half but Manurewa showed their class in the second as they made if four wins from four.

“We were expecting a tough encounter with Pukekohe and it was 100 percent,” said Manurewa coach Jeremy Clark.

“We got a couple of early tries in the game and credit to Puke, the stuck strong and held on when we looked like scoring.

“Second half we identified what needed to be done and just went to work wearing them down and scored some good tries with forwards and backs combining well.”

Patumahoe kept pace with Manurewa as they too won for the fourth straight week as they had to make a second half comeback to best Bombay 31-18 at Patumahoe.

Bombay had the better of the first half and took a 13-3 lead into the second spell before Brad Healy’s side came storming back.

“Bit of a cliché but it really was a game of two halves,” Healy said. “Bombay started really well and put us under pressure in the first half.

“I was happy with how we came into our own in the second and kept our tempo up, which was really pleasing.

“We wanted a test and that is exactly what we got. Credit to Bombay, they never went away the whole game after a tough week for the club.”

Defending champions Karaka got their season back on track with a dominant 84-3 win against Weymouth at Laurie Gibbons Reserve.

Craig Hill’s side were never troubled and they cruised to a big win.

“Pleased with our performance,” coach Craig Hill said. “We had a number of our backs stepping up from P2 and they played well.

“Weymouth, as we have heard from other coaches, don’t go away and kept competing for the whole 80.”

Te Kauwhata spoiled the party at Maramarua as they secured a 15-14 win over the home side in another epic Golden Gum Boot clash that also doubled as the Counties Energy Game of the Week.

Drury pipped Puni 32-31 in a classic back and forth contest at Puni between two strong Sid Marshall Shield sides.

Patumahoe scored a 22-5 win over Te Kohanga in an all-Sid Marshall Shield contest.

Karaka beat Pukekohe 25-20 in Massey Cup U21 action to stay top of the table while Patumahoe eased to a 36-12 win over Papakura.

Waiuku enjoyed a 14-9 win over Karaka at Rugby Park in U85kg play.

Elsewhere, Onewhero grabbed a 21-19 win over Pukekohe while Patumahoe scored a 32-6 win over Papakura and Beachlands Maraetai kept their semi-final hopes alive with a 22-7 win over Bombay.

Ardmore Marist thrashed Te Papapa/Onehunga 55-0 in Women’s Premier action but it wasn’t such good news for the other two Counties Manukau sides.

Manurewa went down 27-19 to College Rifles while Papakura were hammered 120-7 by Ponsonby.