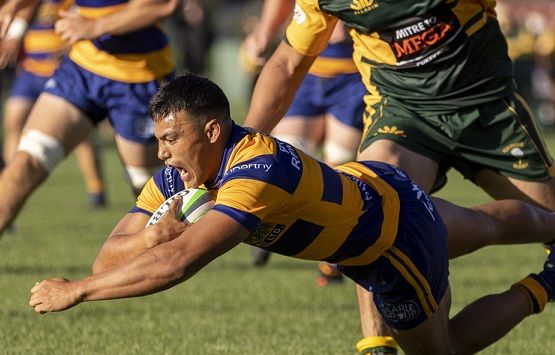 Patumahoe’s William Furniss celebrated his 100th game for the club in perfect fashion as his side powered to a 31-13 win over Pukekohe in their McNamara Cup opener at Patumahoe Domain on Saturday.

Furniss played the full 80 minutes, delivering a typically high work-rate performance as his side got their season off to the perfect start and life under new coach Brad Healy in a winning way.

“It was good to get the win over the old foe. It was a good battle. Some good signs there, plenty to work on and good to process that one over the rest of the weekend and crank back in on Tuesday,” said coach Healy.

“The boys got up for Willy’s 100th. It is hard to say the words for him – he is massively under-rated. He is just a battler for Patumahoe – he wears that crest every week right on his heart and just does it for the boys.

“It isn’t hard to get up for games like this when you have got a guy like that that has run out 99 times before.”

PIC Steelers and Pukekohe fullback Jarrod Halliday left the field in the final quarter of the game with a head knock and cut, which resulted in a blue card and an automatic entry of concussion protocols.

There was little between the two sides across the 80 minutes and Papakura should be heartened by a performance that will have the other clubs talking.

Karaka coach Craig Hill was relieved to walk away from the game unscathed but knows his side were given a stern test.

“Happy to come out of the game with five points against a much-improved Papakura team,” he said.

“We made a number of line breaks, but their scramble defence and last line of defence was very good. Our ball control was loose, turning over a lot of ball and we just couldn’t build momentum at times.

“Ume Fosita controlled the game well and Jonah Refiti made a number of breaks.”

Manurewa had to fight back to beat Bombay 35-12 at Mountfort Park with a dominant second half performance.

Jeremy Clark’s side trailed for a period of the game before getting into their work as the game wore on.

“It was a very physical encounter. Was a good start to the season,” Clark said.

“The first half was a grind. Bombay had the wind so we wanted to control possession for long periods and we did that.

“Second half we adjusted and put some policies in place and finished strong so pleasing to pick up the five points at home.

“Stand out performers – I was impressed with the forward pack. They really set a platform to play off.

“Our finishers that came on really supported the tough stuff done before them so team effort that’s for sure.”

Ardmore Marist racked up points late but had to work hard to overcome a determined Weymouth outfit at Laurie Gibbons Park.

The sides were locked up at 5-5 at the break before Ardmore Marist kicked clear in the second spell.

“We had a tumultuous 24 hours and for the boys to come out and put a bonus point win is credit to the work they have been putting in for the last four months,” coach Duncan McGrory said.

“Weymouth put up a great hearty fight the entire game, but we bombed three tries in the first half, one being a knock on over the try line.

“Our first-five Tremaine drove the team well with Lettuce, our 19-year-old hooker, carrying well all over the park.

“Willy, our number eight, proved to be a huge advantage in the dark spaces.”

Patumahoe eased to a 33-10 victory over Pukekohe in the other match of the round.

Drury celebrated their centenary in style with a cliff-hanger 27-25 win over Maramarua in front of a big crowd at Drury Domain in Sid Marshall Shield action.

With a big evening planned, the fans were treated to a terrific game with the home side fittingly getting the win.

Defending champions Te Kauwhata made a successful start to their title defence with a 31-5 win over Tuakau at Te Kauwhata Domain.

Puni made a big early statement by thumping Te Kohanga 74-12 at Te Kohanga while Waiuku made a winning debut in the grade on the back of 28-17 win at Mountfort Park over Manurewa.

Patumahoe and Manurewa continued their recent rivalry in Massey Cup U21 action as the two sides played out a thrilling 16-16 draw at Patumahoe Domain.

Both teams had a chance on the hooter to steal victory, but the match ended in a deserved draw.

Elsewhere Pukekohe knocked over the defending champion Papakura side 31-12.

Waiuku racked up a score as they demolished Bombay 81-0 in U85kg action.

Manurewa bounced back from a surprise first round loss to beat Te Papapa Onehunga 29-0 in women’s premier action.

Ardmore Marist bounced back from an opening round loss to hammer Grammar TEC 61-10 while Marist Brothers beat Papakura 55-35 in a high scoring affair.