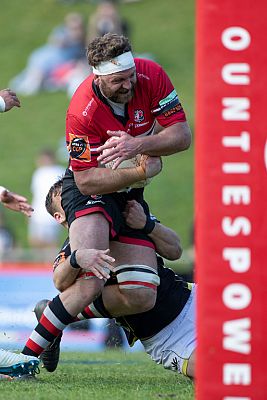 The Counties Manukau PIC Steelers want to fire-up from the start when they host Northland in an important home game at Navigation Homes Stadium in Pukekohe on Sunday.

The Steelers have given up the lead in most of their matches, and while they have finished strongly, they have come up just short.

Steelers coach Darryl Suasua said he is looking to an improved performance from the start.

“It is a mental thing. We need to switch on, and not leave ourselves chasing the game in the second half. We have been outstanding once we get on a roll, and to be fair we should have had two or three more wins as a result,” said Suasua.

“The second half effort against Tasman shows we can take anyone on and be a danger.

“Northland are a real form team with a strong pack and some excellent ball-runners. Most of all they have a never-say-die attitude so if we are not on our game from the opening kick-off, then we will be in trouble.”

Suasua said while the win was imperative to give them the best chance of remaining in the championship, he is more concentrating on a full 80-minute performance.

“If we just focus on what we can do on the field, and give a complete performance, then results take care of themselves.”

With three games still remaining, a number of starters will come off the bench as the Steelers look to freshen up some players who have carried a big workload.

They will enable first starts this season for Daymon Leasuasu, 50-game veteran Sikeli Nabou and strong running halfback Liam Daniela after an excellent display against Tasman.

Luteru Laulala moves from fullback to start at first five with an exciting look to the backline with slick wingers Toni Pulu and in-form Tevita Nabura, along with All Black Sevens players Sione Molia and Etene Nanai-Seturo.

Kids have the chance to emulate their favourite Steelers player, or indeed play alongside them in the curtain-raiser. The Steelers’ Community Rugby staff will stage Rippa Rugby from 2.45pm to 3.30pm at Navigation Homes. Some come along and sign-up and you will get the chance to play Rippa Rugby on Sunday.

There is free entry to the embankment for children under 13(accompanied by a paying adult), while if you redeem your eTicket online, you will get a free slice of Sal’s Authentic New York Pizza.