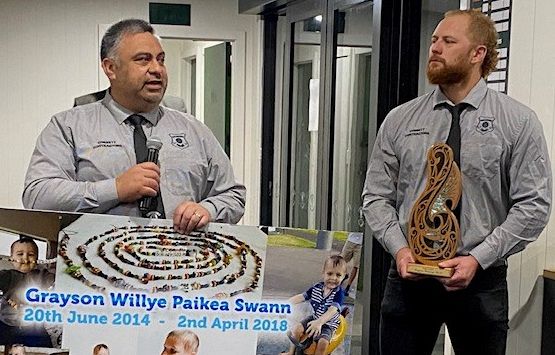 Pukekohe claimed the Grayson Bravery Shield on Saturday as they beat Maramarua 53-10 at Colin Lawrie Fields but the game meant a lot more to both teams than just a result.

The Grayson Bravery Shield carries plenty of significance for both clubs and was presented to the Pukekohe skipper after the game after Maramarua won the inaugural contest a year ago.

Miles Swann, a current player with Maramarua, previously played for the Pukekohe club. It was during this time that Swann and wife Angela’s three-year-old son Grayson passed away from cancer.

Swann’s Pukekohe President’s team rallied around the family, supporting and helping them through the difficult time.

Swann now plays for Maramarua and enjoys the camaraderie of the team and the club.

The shield is in memory of honouring Grayson and all those affected by cancer.

“It is a brotherhood fighting it out on the field,” Swann said. “The battle on the field was tough but in the scheme of things only small in comparison to what our heroic angels have had to deal with in their own fight.

“We hope that this Shield will continue to create strong bonds between these two clubs and always bring awareness and legacy of those who have or are fighting for their lives due to cancer.”