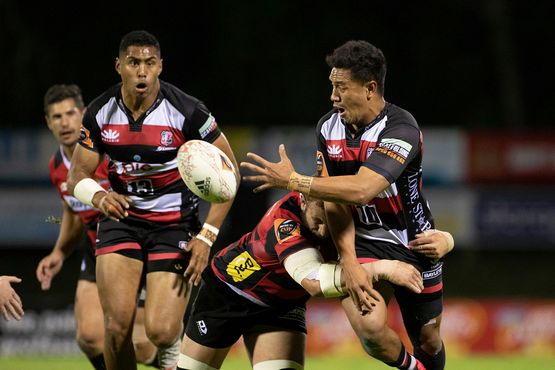 The PIC Counties Manukau Steelers season ended with a 14-19 loss to Canterbury at Navigation Homes Stadium.

Despite the loss it was a performance the team can take a measure of pride in. Up against one of the competition superpowers the Steelers defence was outstanding and their endeavour on attack was ceaseless.

Autumnal conditions greeted players and fans alike and it was Canterbury opened their account in the 14th minute when fullback, George Bridge, crashed over under the posts after a clinical build up by the visitors.

The Steelers had worked hard on their lineouts at training this week and the extra effort paid dividends in the 21st minute when following a clean take a 10-man drive ensued . From the drive centre, Nigel Ah Wong burrowed under the forwards to score.

Canterbury looked to strike back but the Steelers defence was organised and with the scrum working well it was the Steelers who turned defence into attack.

When Sione Molia scored out wide and Luteru Laulala kicked his second conversion of the half the home side were ahead 14-7 and looking good.

Sadly for the Steelers it was Canterbury who had the momentum going into the break when in the 40th minute centre, Braydon Ennor scored, giving the home side much to ponder as they headed for the sheds.

A penalty try at a five-metre scrum to Canterbury opened the scoring in the second stanza.

The scrums then took on special interest with the introduction of Nepo Laulala and Tom Moody for their respective sides.

With two penalties form scrums not long after their introduction it was Laulala getting the better of his All Blacks teammate.

When full time sounded the score was 19-14 to Canterbury.

Prop, Sean Bagshaw playing his 50th match for the Steelers