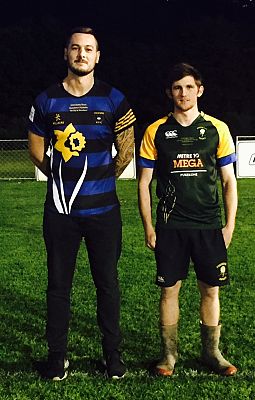 While both sides’ seasons will come to a close on fulltime the two clubs have worked together to raise funds for a worthy cause.

The Cancer Society will benefit from a range of initiatives around the clash at Onewhero Domain with both teams wearing specially designed jerseys that will be auctioned off after the match to help add money to the pot.

On top of that there will be other auction items, raffles and a collection going around the ground.

“We knew that they had done something like this before and we thought it might be a good idea,” the former 200-game player said.

“Neither team can make the semis but the McMiken Shield is up for grabs and both sides will want to win that.”

The game will kick-off at the earlier time of 1.45pm.

The final round robin weekend throws up a number of semifinal possibilities with three premier sides still in the running for the final two semifinal spots.

Karaka will look to secure their place and make up for the first round loss to Papakura Ray White when the two sides meet at Karaka Sports Complex.

Scott Penney’s side needs to win the match and secure a four-try bonus point to advance. If they don’t get maximum points out of the fixture, four time defending champions Bombay will make the semifinals instead.

The Counties Power Cup will be on the line for the final time as well – the winner will hold it over summer.

Manurewa Kidd Contracting can still mathematically miss the semifinals but a point from their clash with Waiuku Brian James Contracting will seal their place. Manurewa’s form has plateaued a touch in the past few weeks while Waiuku have proven to be more competitive than earlier in the season and a good contest is expected.

Bombay has the bye and will be sweating on the right results happening – they do hold the tie-break should they finish level on points with either of the other clubs however.

The top two sides in the competition – Ardmore Marist South Auckland and Patumahoe Troydon Patumahoe Hotel – meet in a dead rubber game at Patumahoe with both sides having cemented their home semifinals. While nothing rides on the match both teams will want to carry momentum into the knock-out games.

The battle between Patumahoe Dave Redshaw Electrical and Ardmore Marist Ross Roof Group in Premier 2 will have the biggest impact on the semifinals. Both sides will qualify with a win while the loser is likely to miss out. Pukekohe Franklin Long Roofing and Manurewa Wise Property Management are all but secured as the top two sides while Karaka will book a semifinal with a win over Papakura.

Semifinalists are set in Premier 3, Under 21 and Under 85kg play despite the final round results.