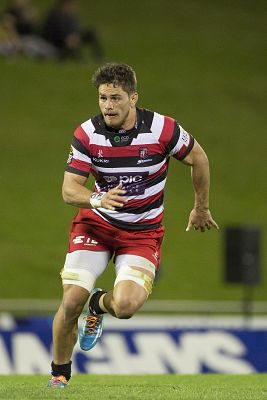 Huge Congratulations to Steelers flanker Sam Henwood who has been called into the Chiefs squad for the 2016 Super Rugby season!

Here's what the Chiefs have to say about him:

SQUAD UPDATE: The Gallagher Chiefs have been bolstered by two experienced additions to their squad ahead of their opening Investec Super Rugby match against the Crusaders this Saturday. Following the loss of All Black prop Nepo Laulala and promising flanker Mitchell Karpik to season-ending knee injuries, depth has been restored with the announcement that Japan prop Hiroshi Yamashita and Counties Manukau Steelers openside Sam Henwood will join the Gallagher Chiefs squad as injury replacements for the 2016 Investec Super Rugby season.

Gallagher Chiefs head coach Dave Rennie said: “Sam had an impressive ITM Cup and was unlucky not to be selected for a Super Rugby team. He’s been playing in Portugal and is in good nick. Sam is ambitious, professional and excited to test himself at this level. Yama is an experienced international prop and has quickly made an impression since his arrival. He earned the respect of his teammates immediately through his work ethic and his sense of humour.”

30-year-old Hiroshi Yamashita joins his Japan Rugby World Cup teammate and captain Michael Leitch in the Gallagher Chiefs squad. The tighthead prop joined the Chiefs environment under the high performance partnership between the Chiefs and Kobe based rugby club, the Kebelco Steelers. The partnership includes players visiting the Chiefs each year to assist their rugby development by exposure to the demands of Investec Super Rugby through the University of Waikato Chiefs Development Programme. The 49-Test prop’s scrummaging quickly impressed the Gallagher Chiefs coaches prompting his inclusion in the squad as an injury replacement.

Sam Henwood was three months into his second season with Portuguese side Tecnico when he was beckoned home to join the Gallagher Chiefs in the wake of a season-ending knee injury to Mitchell Karpik. 24-year old Henwood had been sharing his time between his commitments to Mitre 10 Cup team Counties Manukau and Tecnico who compete in Portugal’s top national competition. Counties Manukau is well represented in the 2016 Gallagher Chiefs squad with Henwood joining seven of his Steelers teammates in the team.

The former Kings College 1st fifteen captain has played for both Auckland and Counties Manukau in the national provincial competition, combining his rugby with tertiary study. Henwood graduated from Auckland University of Technology with degrees in Business and Computer Science, majoring in marketing and software development.