Around the Grounds - July 22 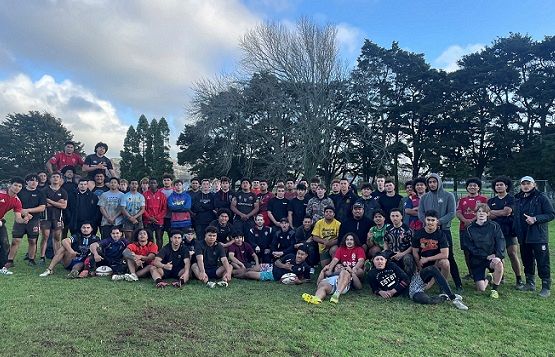 Celebrations in Manurewa
Manurewa celebrated their first McNamara Cup in 24 years in style over the weekend, but my spies tell us the celebrations lasted well into this week.
Jeremy Clark’s side produced a stellar performance to win the final and then went on to party just as well. A few boys were missing from work in the first half of the week!

Secondary Schools camp well received
60 student athletes across local secondary schools took part in the recent Counties Manukau Under 18 boys Emerging Rugby camp at Pukekohe High School over two days starting off these school holidays.
The camp covered a range of indoor and outdoor activities, which developed and tested them individually across personal leadership, the Union’s ‘Pride in the Hoops’ and the Chiefs 4 Cornerstones.
The camp was led by Head of High Performance Chad Shepherd and Teenage Lead Shaun Atamu and was supported by the Community rugby team of John Hall, Liam Daniela and Siaosi Lealiifano as well as Steelers coaches Reon Graham and Richie Harris who were on hand to take a session alongside Community Coach Development Officer Paul Wheeler.

First game action for PIC Steelers
The PIC Steelers get their first hit-out of 2022 when they play in the Chiefs Cup at Te Awamutu on Saturday.
Reon Graham’s side faces Waikato at 11am and will then meet either Bay of Plenty or Taranaki depending on the first result (BOP plays Taranaki with the two winning teams meeting and the two losing sides facing off).
Both games are 50 minutes in duration.