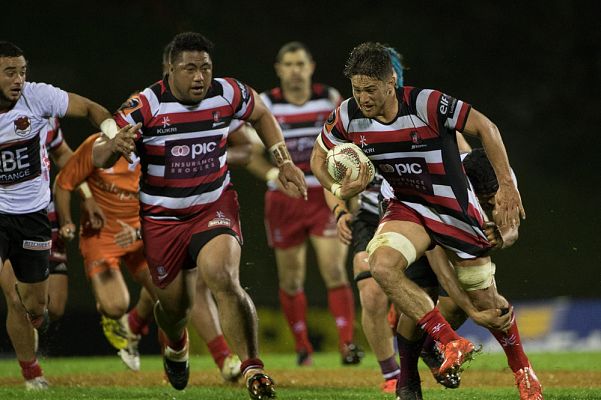 Mistakes proved costly as the PIC Counties Manukau Steelers were edged out by the high flying North Harbour 18-27 at ECOLight Stadium.

After scoring a stunning try, the PIC Steelers took the lead 18-16 early in the second half.

But strong defence from Harbour, who capitalised on Steelers’ mistakes, allowed the visitors to dominate territory in the final 30 minutes.

A late try to winger Tevita Li rubbed salt into the wound by denying the home side a valuable bonus point.

“Overall that was disappointing,” said head coach Darryl Suasua. “We made 17 unforced turnovers and you just can’t do that against a team like this and in this competition.

“Those small mistakes at key times were the difference. We knew they would come at us with their fast defence off the line but dropped ball, and other mistakes really cost us.”

There were some positive for the PIC Steelers with the last 10 minutes of the first half, when they scored a stunning try to Luteru Laulala, and the first 10 minutes o f the second half, highlighted with a tremendous try by Tim Nanai-Williams.

But the visitors proved too resilient on defence and played mistake-free rugby to maintain their unbeaten record.

The stunning try in extra time in the first half brought the Steelers back into the match to trail 11-16 at the break.

The Steelers turned a late penalty into a lineout 40m out, with Stephen Donald throwing a sublime long pass that put the flying Tim Nanai-Williams into the hole, he was brought down 5m out and form the ensuring ruck Luteru Laulala picked up a pass millimetres from the turf and jinked over.

Earlier Harbour charged through some wayward defence to present prop Sione Mafileo with the try for the early 7-0 advantage to the visitors.

While the Steelers mounted their attacks, a well organised and speedy Harbour defence held them at bay, taking advantage of errors to bag three penalties for the 16-6 lead, until the stunner from Laulala brought them back into the game.

The second half began with the Nanai-Williams try from another excellent Steelers attack, but they rarely got into the attacking zone for the final 30 minutes with Harbour kicking two penalties and the Li try.

For the PIC Steelers, Pauliasi Manu was outstanding in the front row while Ronnie Raaymakers produced another 100 per cent performance. In the backs Stephen Donald controlled play with aplomb and Nanai-Williams made the most of his chances at centre.

The PIC Steelers will set their sights on a potential Ranfurly Shield challenge when they meet Canterbury next Wednesday in Christchurch.