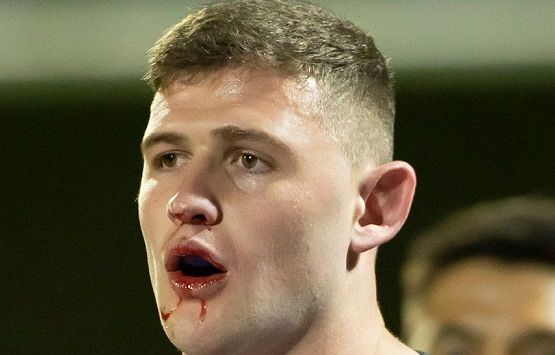 Counties Manukau, Blues and All Black flanker Dalton Papalii is tackling youth mental health in 2022 after coming up with a novel way to support the cause.

The dynamic international No 7, is adding mental health awareness to his growing list of responsibilities, after recently being announced as Blues skipper this year. He will donate $7 for every tackle he makes this season to New Zealand mental health charity I Am Hope.

The 11-test All Black says he felt it was the right time to give something back and wanted to support mental health.

“Mental health is a growing problem for young people, not just in sport but with growing pressures financially, at school or work, in our social lives every day. We need to start addressing these issues, not just by donating money but something we need to talk about more often.

“This money will help more I Am Hope youth ambassadors tell their own stories of struggles, and overcoming mental health issues in schools that will resonate with Kiwi kids, letting them know they are not alone,” Papalii said.

“It was actually my mum’s idea. When I was looking around for a mental health charity to support, my mum suggested I look into Mike King’s charity and when I did, it ticked all the boxes for me,” he added.

Currently, I Am Hope has a total of three school-ambassador teams, including I Am Hope founder Mike King. The team spends most of the year on the road visiting schools and communities up and down New Zealand.

Since 2013, I Am Hope ambassadors have spoken to more than 250,000 young people face-to-face. The charity is planning to double its school ambassador outreach team by 2025.

With the Blues throwing their full support behind Papalii, fellow teammate and All Black winger Caleb Clarke said he’s proud of his new captain’s efforts.

“It’s a great thing Dalton is doing, and I challenge every Kiwi who is able, to match Dalton’s $7 by donating to the Blues Givealittle page that has been created for this purpose.

“Let’s get more youth ambassadors in schools and reaching more Kiwi kids. They need to know they are not alone,” he said.

I Am Hope founder Mike King says it’s encouraging to see the people that our children look up to lead the charge on mental health.

“It’s awesome to see our elite athletes step up to help. The truth is these kids look up to people just like Dalton and Caleb, so this will make a difference,” King said. “Everybody struggles with mental health, but when you’re going through it, you think it’s just you and something must be wrong with you, especially if you’re young and isolated,” added King.

If Papalii is injured this season, his replacement will continue the $7 per tackle donation for the rest of the season.