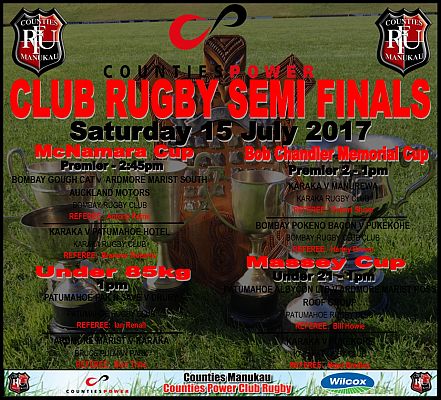 Semifinal week of the season throws up some exciting sudden-death match-ups in Counties Manukau club rugby while one trophy is up for grabs.

The head-to-head record is one apiece between the two sides this year but Bombay carries significantly more momentum into the playoffs having dominated the second round.

Coach Jeff Marr knows his side is favoured to win the game but insists they cannot expect to just turn up and get the win.

“We certainly won’t be taking anything for granted.”

Ardmore Marist had to win their final round fixture to make it into the semifinals and hold off a late-surging Pukekohe Mitre 10 Mega but they came up with the key performance when they needed it in beating Patumahoe to book their semifinal spot.

They made a late round charge last year to go all the way to the final so Saua Leaupepetele’s side knows a thing or two about getting the performance right when it counts most.

They run into a team that lost only once in the second round but he isn’t fazed by that.

“We know it is going to be tough but you have to go through any of the three other teams if we want to win a championship,” Leaupepetele said.

“We are really looking forward to it.”

In the final weeks of the round robin Karaka managed to jump Patumahoe Hotel for second place and the right to host the second semifinal.

While Patumahoe won both matches between the two sides this year they come into the semis on the back of two successive defeats.

“I think the confidence is there,” Patumahoe coach Jeff Maka said. “The boys believe we can go out there on Saturday and get the result.

“Even though the results haven’t gone our way in the last two weeks we can use that as motivation for this week. In saying that it is never good going into a semifinal after a loss in your last game but we are pretty confident.

“Karaka are a good team and we will need to be at our best if we want to win this.”

Karaka takes a three-game winning streak into the semifinals but their last loss was to Patumahoe at the very venue where this semifinal will take place.

Karaka coach Craig Hill thinks it was important for his side to jump Patumahoe down the stretch and sneak that home semifinal.

“We have to be pleased – it didn’t seem like it was going to be on the cards,” Hill said.

“It will give us a little bit of an advantage but it doesn’t win you games. Patty has beaten us twice this year so we will have to lift for it.

“It is all on the day so it will be like anything – if you take your opportunities you will get through.”

In Premier 2 action Bombay Pokeno Bacon hosts Pukekohe in one semifinal while Manurewa travels to Karaka in the other match. Both matches will serve as curtain-raisers for the Premier 1 semifinals.

Premier 3 action will take place at Laurie Gibbons Domain in Weymouth as the unbeaten Weymouth side looks to lift the Sid Marshall Shield in the competition final against Maramarua and complete the perfect season. Puni and Te Kohanga will playoff for third and fourth at the same venue in the curtain-raiser.

Long-time club president and current club delegate Joe Faliu is looking forward to a big day as his side looks to cap a perfect rebuilding season in a division that has been extremely successful in 2017.

“We have bounced back really well after a disappointing season last year in Premiers,” Faliu said. “While we don’t want to be in division 3 we needed to start our rebuild somewhere.

“It has been a good season but on finals day anything can happen.

“Coach Mike Tuua and his staff will be telling the guys to relax and stay calm and hopefully that works.”

Top qualifiers Patumahoe Albcon Ltd will host Ardmore Marist Ross Roof Group in one Under 21 semifinal while Karaka takes on Pukekohe in the other semifinal at Karaka Sports Park.

Patumahoe Pak N Save is at home to Drury in Under 85kg action while Ardmore Marist hosts Karaka in the second semifinal.